In a poignant op-ed for TIME Magazine, singer and actress Selena Gomez makes a plea for immigration to be seen as what it is: a human, not political, issue. In recounting her family’s own immigration story, she calls on the reader to take the time to learn more about the United States immigration system, and … END_OF_DOCUMENT_TOKEN_TO_BE_REPLACED Lawyer: “Donald Trump and the Trump organization are running and engaging in a multi-state criminal conspiracy” In a segment titled, “The Well-Documented Case of Trump’s Undocumented Employees” on Full Frontal with Samantha Bee, former undocumented employees of the Trump Organization bravely speak out about the abuses they experienced working for President Trump and his family.  … END_OF_DOCUMENT_TOKEN_TO_BE_REPLACED

“America cannot be and will not be, one hopes, the kind of nation that those folks want” Last night, on the heels of the White House’s announcement of a forthcoming national emergency declaration, MSNBC’s Chris Hayes provided Americans with a much-needed reality check on the shifting meaning of “border security” debate. Standing in El Paso … END_OF_DOCUMENT_TOKEN_TO_BE_REPLACED

This week, talk show host Samantha Bee of TBS’ Full Frontal hosted an entire holiday special highlighting Donald Trump’s continued assault on immigrants, what’s going on with asylum and families at the border, and the plight of immigrant families across the country. “Christmas on I.C.E.,” as the special was called, was dedicated to raising money … END_OF_DOCUMENT_TOKEN_TO_BE_REPLACED

Donald Trump, Fox News, and Republicans have been using the migrant caravan to scare base voters into turning out for the midterm elections. And while some outlets have been repeating their breathless claims, late night shows have seen through Trump’s lies. As Samantha Bee, Seth Meyers, Stephen Colbert, and others have pointed out — asylum seekers … END_OF_DOCUMENT_TOKEN_TO_BE_REPLACED 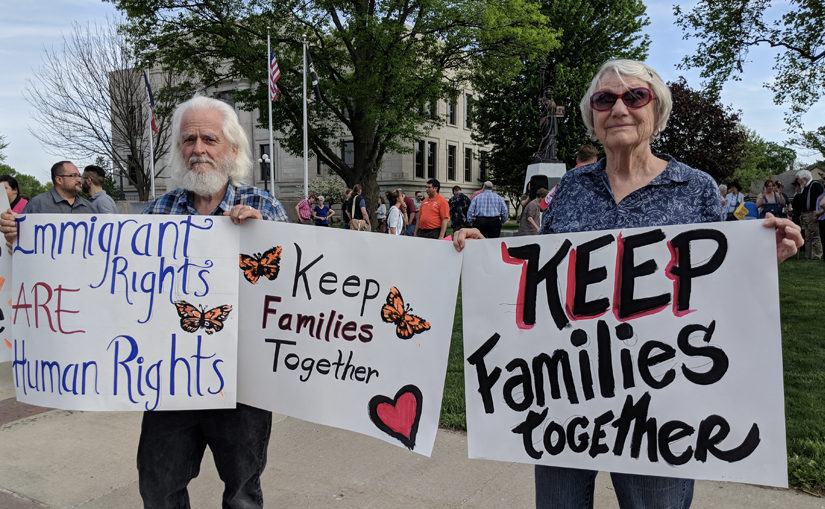 Last night at the MTV Video Music Awards, rapper and music producer Logic took the stage with One Republic’s Ryan Tedder for a powerful performance of Logic’s song “One Day”, that highlighted the Trump Administration’s immigration policies and the separation of children and families. Logic and Tedder were joined on stage by hundreds of children … END_OF_DOCUMENT_TOKEN_TO_BE_REPLACED

The Trump White House is full of extremist right-wing characters, perhaps none more so than “senior policy adviser” Stephen Miller and his former boss, Attorney General Jeff Sessions. The recent Michael Wolff book “Fire and Fury” described Miller memorably as “a fifty-five-year-old trapped in a thirty-two-year-old’s body”, who was brought onto the Trump campaign for … END_OF_DOCUMENT_TOKEN_TO_BE_REPLACED