Photoblog: What Real Movement Support Looks Like (When Thousands of People Actually Show Up to a Rally)

Yesterday, we wrote about the weakness of the anti-immigrant movement and their apparent inability to turn out support.  Today, some of the big news headlines are about a John McCain town hall event in Arizona, where a handful of overzealous anti-immigrant cranks heckled the Senator over his support for immigration reform.  The legislative fight ahead will probably see its fair share of these opponents.  But as the battle heats up, let’s not forget where the movement strength and the electoral power really is.  It’s with the 75% of Latinos who voted for President Obama over Mitt Romney in the last election.  It’s with the 70% of all voters who support creating a path to citizenship for the undocumented Americans-in-waiting already living here.

And this is no high-water mark:  the Latino vote is projected to continue growing, and even states like Arizona and Texas are destined to eventually turn blue.  Republicans who don’t see that they must act on immigration reform in order to attract some Latino voters toward the GOP will be responsible for–as Ted Cruz put it–turning the GOP into the Whig Party.

In order to remind Republicans–and all legislators–where political power really lies on immigration reform, we’ve put together this photoblog of recent graphics, protests and rallies showing support for immigration reform.  2012 needed no pictures–only the fact that 12 million Latino voters turned out at the ballot box, three-fourths of them to vote for Obama:

The rest of the pictures below start from 2011 and stretch back to the million-man marches of 2006, the last time comprehensive immigration reform was debated.  It’s something for legislators facing a couple of hecklers to keep in mind.

Here are pictures from 2011, of protesters in Alabama rallying against the state’s worst-in-the-nation anti-immigrant law, HB 56: 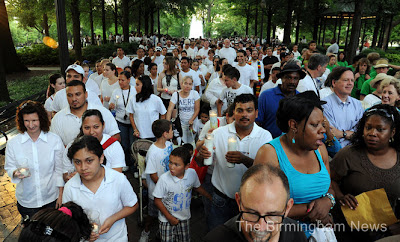 Here’s a photo from the 2010 March for America, rallying in support of immigration reform in Washington, DC:

And here are protests from 2010 speaking out against Arizona’s anti-immigrant law, SB 1070.  Here’s Dallas: 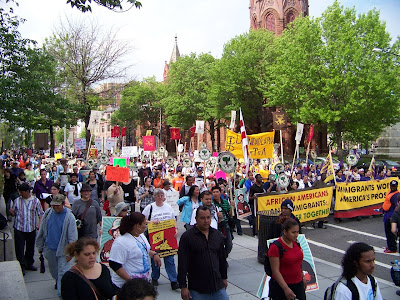 And of course, the million-man protests of 2006: