It's Down to the Wire for Ricardo's Case. Sign His Petition Now! 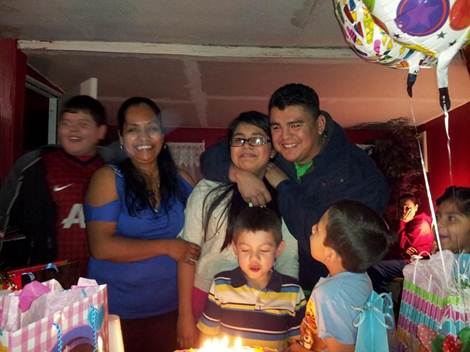 A last-minute reconsideration from ICE means that, for now, Ricardo Ramos is still with his family.

We began writing about Ricardo Ramos this week after the Latino and Polish communities in Ohio banded together to organize a 20-mile pilgrimage for the Cleveland father, an event which drew the support of over one hundred Ohioans and garnered media attention far and wide.

Ricardo is the father of three US citizen children and has been a resident of Ohio for sixteen years.  After being caught driving without a license, he was told that he had to leave his family and his adopted country by January 1st.  He then received a 2-week stay of deportation that allowed him to stay in the US until yesterday–long enough for him to be present for his oldest daughter’s 12th birthday (pictured above).

This morning, we received terrible news: ICE had denied Ricardo’s request for a longer stay, and ordered him to appear at the Cleveland Federal Building by 3 pm today for deportation. Heartbroken, Ricardo and his family prepared to say goodbye.

At the last minute, however, a request for reconsideration from Ricardo’s lawyer–David Leopold–was recognized by ICE, which announced that they were taking another look at his case.  Ricardo received the news in front of a crowd of supporters who had gathered at the Cleveland Free Stamp to rally around him.

At this point, anything could happen in Ricardo’s case.  Thousands of people have already signed the petition to keep him at home.  Please add your voice–help keep Ricardo and his family together!