John Kelly and Steve King: Kelly Says “Shut Up” While King Drinks Up

Is this the kind of “support” for “the men and women on the front lines” that appeals to Kelly?

Yesterday, DHS Secretary John Kelly lashed out, saying that critics of the Trump Administration’s mass deportation policies should “shut up and support the men and women on the front lines.”

Then, news broke yesterday afternoon that DHS had deported Juan Manuel — a protected DACA recipient — despite assurances from Trump and Secretary Kelly that Dreamers with DACA would not be deported.

We assume, then, that Secretary Kelly must be cheering on leading congressional nativist and immigrant hater Steve King, who tweeted in response to Juan Manuel’s deportation: 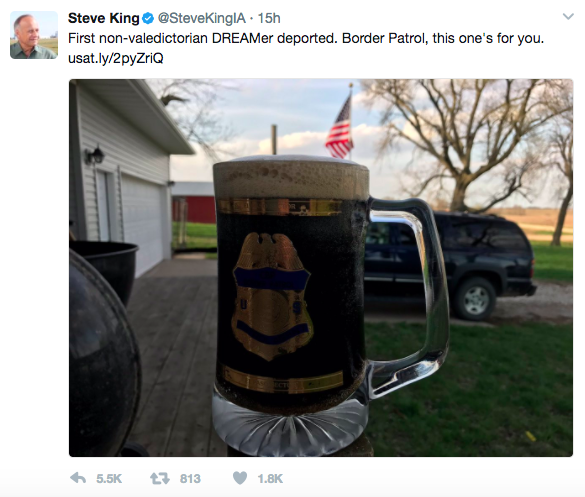 After meeting with Secretary Kelly in March, Congressional Democrats reported that Sec. Kelly said, “I can guarantee you we’re not going after kids that are fully DACA qualified.” More recently, Sec. Kelly has flat-out stated that DHS is not targeting non-criminal undocumented immigrants, despite data and specific cases that prove the contrary.

Instead of ordering critics to ”get behind the men and women on the front lines,” might we suggest that General Kelly hold his troops accountable? Perhaps he could start by clarifying the lie told by his spokesperson last night. In response to the USA Today about Juan Manuel, DHS said that his DACA status had expired in 2015. The reporter who broke the story, Alan Gomez, tweeted last night in response: “We have seen his ID that says it doesn’t expire until 2018.”

ICE and CBP are notorious for their cowboy behavior, lack of transparency, and disregard for civil rights and due process. The facts — a  DACA recipient is deported without so much as a piece of paper, much less a day in court, and in direct contradiction to Kelly’s assurances to Congress — suggests that the Secretary has some explaining to do. Is he willfully misrepresenting DHS’s policies and actions, or is he clueless about what his out-of-control agents are doing?  Either way, the American people — and 750,000 DACA recipients such as Juan Manuel — deserve answers. Or, he could go have a beer with Steve King, toast the agents who ripped Juan Manuel away from his life, and complain about those who believe armed agents of the state should be accountable to the citizens who pay their salaries.