Effort To Repeal The Texas Dream Act On Life Support

With the Texas legislative session coming to a close on Monday, June 1st, the repeal of the Texas Dream Act seems grows less likely by the hour.

Local media from across the Lone Star State are declaring the measure, also known as SB1819, “dead” for the legislative session.

From The Dallas Morning News:

Barring some last-ditch maneuvering, a proposal to repeal a law that allows some students who are in the country illegally to pay in-state college tuition is done.

From the Amarillo Globe-News:

Perry’s Senate Bill 185, which would have required cities to comply with federal immigration laws, and another Senate bill that would have repealed a 14-year law that allows some undocumented students to get in-state tuition at public colleges and universities, are dead this session.

The repeal effort, which we have discussed in previous posts, carried particular significance for several audiences. For the undocumented youth in Texas, and across the country, the Republican-led maneuver took aim at the first statewide Dream Act – which was signed into law by Governor Rick Perry back in 2001.  For the Republican Party however, SB1819 meant another attempt to reverse the progress that the immigrant community has made in the past couple of years.

Sponsored by Senator Donna Campbell (R-25), SB1819 captured national attention for its jumpstart in the Texas Senate, where it passed its first committee stop after enduring several hours of opposing testimony.

In a column published last week on the Austin American-Statesman, Senator Campbell did not shy away from spreading the backwards rhetoric that continues to trip Republicans, including 2016 hopefuls, on the issue of immigration.

While arguing that the state of Texas has “ kept [its] promise to [undocumented students], and they have moved through our school system,” Senator Campbell ignores the fact that higher education has not always been an option for undocumented students – therefore, denying them in-state tuition would put them even at greater odds of ever achieving their full potential.

Moreover, Senator Campbell’s arguments over the numbers surrounding in-state tuition for undocumented students has not only been dispelled, but also crushed by some of her Republican colleagues.

With the clock running out, it would appear as if Republicans across Texas, and across the nation, are reminded once again once again of what policies like the Texas Dream Act means for our community. 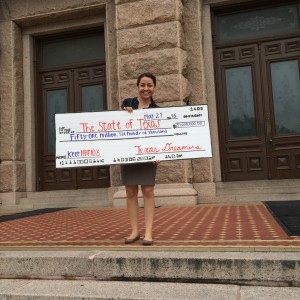 Karla Perez, President of the U. Houston’s Youth Empowerment Alliance, holds a check symbolizing the contributions of undocumented youth to the state of Texas.