On Wednesday, a day when DREAMers all over the country were celebrating the beginning of President Obama’s deferred action program, Governor Brewer was busy playing the Grinch by issuing an executive order that would prevent local immigrant youth from being able to access state services like drivers’ licenses.

Undocumented immigrants “are here illegally and unlawfully in the state of Arizona, and it’s already been determined that you’re not allowed to have a driver’s license if you are here illegally,” Brewer said in a press conference. “The Obama amnesty plan doesn’t make them legally here.”

It was a typical move for Brewer, who signed SB 1070, one of the nation’s worst anti-immigrant laws, albeit a mostly symbolic one—there are already state laws on the books barring undocumented immigrants from obtaining drivers’ licenses or state ID cards.  Still, bloggers and commentators were (rightfully) horrified, questioning how low Brewer’s vindictiveness will go.  Here’s a roundup of their commentary:

From Marissa Treviño at Latina Lista:

To even the most indifferent American, who has no thought one way or the other on the issue, Brewer’s actions go beyond being plain mean-spirited. They wreak of vindictiveness against a political party and its leader that she has made no secret that she loathes. What better way to symbolically give the finger to this administration than to deny the most vulnerable recipients of a measure that she sees challenges her own authority.

Brewer’s outright hatefulness towards the undocumented youth serves as an extremely concrete example of GOP attitudes towards Latinos…Brewer’s actions have the potential to solidify the disdain towards the GOP by Latino voters, wherever they live…If ever there was any doubt that Brewer has been acting in her own self-interest when it comes to towing a hard stance against undocumented immigration, her latest action should dispel that doubt. It’s a sad commentary when a leader, at any level, chooses to target young people to create a political point.

A statement from Puente, a Phoenix-based human rights organization:

Once again, Gov. Jan Brewer has stood on the wrong side of history by implementing anti-immigrant policies and directly contradicting federal mandates related to immigration.  Brewer has once again put Arizona’s name on the map as the epicenter of anti-immigrant racism and hate.”

Digby at Hullabaloo reminds us of other extremists in history who have stood in the schoolhouse door of progress:

This isn’t the first time a racist Governor has defied the federal government. But it’s been a while. 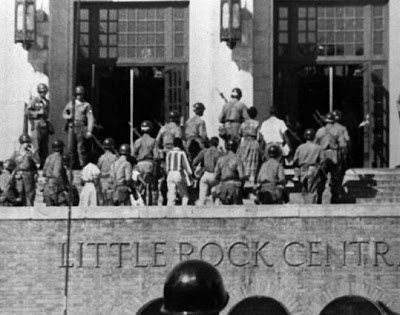 Schapira pointed out that Arizona already had a number of strict immigration laws in place, including one that barred illegal immigrants from getting drivers licenses or state issued identification cards. The law may have already been interpreted to bar any newly immune immigrants from getting those state IDs, Schapira said. That means Brewer’s order effectively carried no weight at all. After the order was issued, Alessandra Soler, the Arizona director of the American Civil Liberties Union, said the whole thing made it look as if Brewer didn’t really understand the law in the first place. “This is yet another reason why Arizona has no business trying to regulate immigration matters,” Soler said in a written statement.

David Dayen at FireDogLake agreed about the general impotence of the order:

This ultimately is a toothless directive that will not stop anyone from anything; it just restates existing law in Arizona around granting driver’s licenses and other benefits to non-citizens. But it shows the cruelty that has characterized a substantial segment of the Republican Party against a group of 1 million or more kids that know no other country than the US.

Joe at Joe My God wondered just who these young immigrants were that Brewer was so adamant about attacking: 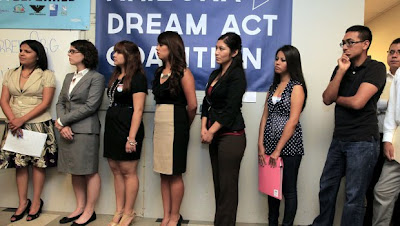 Shorter Jan Brewer: “I may be not able to kick you out, but I can make damn sure you don’t drive or eat.” Just look at all these terrible teenagers, trying to use up all of Arizona’s limited supply of driver’s licenses!

Arizona Democratic Congressman Raul Grijalva said today, “When 73 percent of Arizonans support the DREAM Act, you can’t even accuse her of playing politics. She’s just being herself, hurting our economy and pulling families apart to please a small minority of the population,” he said.

La Opinión cautioned Brewer that the immigrant youth she seems to hate so much are now around to stay, meaning she should consider more forward-looking approaches on how to deal with them:

Arizona Gov. Jan Brewer seems to have an unlimited supply of antagonism toward the undocumented. Any movement in the immigration front inspires in her a visceral reaction, the result of resentment and fear of undocumented immigrants… Even if Arizona dislikes deferred deportation, these beneficiaries are not deportable; this state should start learning to deal with realities in a more positive way. The election that last year ousted the mastermind of SB 1070, Russell Pearce, awakened a tepid hope that there would be common sense in Arizona. But neither that nor the unconstitutionality of most of that law seemed to calm Brewer’s rabid extremism on immigration.

Finally, a Los Angeles Times article notes how Arizona is creating difficult logistical challenges for itself:

And there is another problem. Brewer’s order creates a huge headache for state agencies, including the Department of Motor Vehicles, which now face the unenviable task of figuring out a way to determine who is eligible for services or benefits. That won’t be easy because other groups of immigrants also receive deferred action from deportation. So how will a DMV employee know who should be granted a license or state identification? No word yet from the governor on how those thorny issues should be resolved.

Immigrant rights groups are already gearing up to haul Brewer’s executive order to court.  That means, as the LA Times notes, that “just two months after the U.S. Supreme Court gutted most of the state’s notorious immigration law, Arizona is almost guaranteed to wind up back in court over yet another immigration matter.”